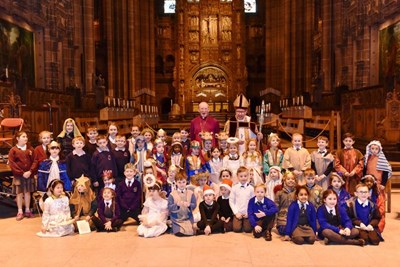 Dressed in costumes from angels to donkeys to sheep, over 1,200 pupils from Catholic and Church of England schools across the wider Liverpool area attended a special Schools’ Epiphany service on Tuesday 24th January 2017.

‘The Greatest gift’, the theme of this years’ service included a drama, retelling the story of the three kings’ arrival in Bethlehem and a dance of welcoming the arrival of the star by pupils from Maghull High.

The young congregation arrived at the Cathedral greeted by a medley of carols sung by a choir of children from Huyton with Roby CE Primary School.

“it was wonderful to join with the Archdiocese of Liverpool once again for this ecumenical event. The service managed to bring the events of the Epiphany to life for the children and it was great to see how engaged and involved they remained throughout.”

A grandmother who was in the congregation commented:

“Well done to all involved in the service today. I have never seen so many excited beautiful faces, including my own granddaughters. I had the pleasure of holding the door open for some of the children arriving, and the gasps were amazing. They all looked as though they were hanging on every word as well as having fun, which says it all to me.”

Pupils from the following schools attended.