80th anniversary of topping out 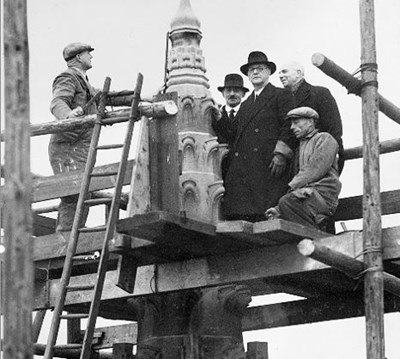 February 20th, 2022 marks the 80th anniversary of the Topping out Ceremony on the Vestey Tower. Sir Giles Gilbert Scott, Dean Dwelly, and a group of masons took part in the event.

The North West pinnacle of the tower which is 1 inch taller than the other pinnacles, was encased in scaffolding and a platform was built to hold the dignitaries and masons. To reach the platform Mr Morrison, the contractor; Mr Pittaway, Clerk of works; and Mr Meredith, the general foreman; joined Sir Giles in the lift up to the belfry floor. The lift was not working well and stopped several times. The final ascent was up a relay of ladders where the pinnacle was ready to be lowered by the crane driver, Mr Dixon when Sir Giles gave the word. Once it was in position the banker mark of the mason was carved on the inside face. Sir Giles suggested that the date should be included on the outside face. Mr Pittaway added that Sir Giles initials also needed to be added.  A sharp-eyed visitor can still see these marks when visiting the tower.

The structure was not intended to be suitable as a platform, but several people managed to fit on it. It was a windy day and the scaffolding felt as if it was moving. Sir Giles had to hold on to the pinnacle for support. Despite the wind and the cold, the photographer Mr. Joe Marsh asked Sir Giles to remove his hat. Those present on the platform were Dean Dwelly, Sir Giles Gilbert Scott, Owen Pittaway and the masons, Harry Oxton and Hughie Williams.

After the ceremony, Sir Giles sent this message to the workers:

“Mr Morrison, Mr Pittaway, Mr Meredith, and all of you. I want to say thank you for all you have done and the grand work you have done in getting this building up. At one time I never thought we would reach this point. But we have got there. In peace time we would have celebrated with plenty of drinks and smokes, but now we cannot have anything like that. We have a really good bit of masonry which I hope will last for centuries. I cannot adequately express my feelings to you for your help and cooperation.”

As we prepare to celebrate in 2024, we remember the men who have worked on this wonderful building and give thanks for all who are now following in their footsteps as we encounter new ideas and plan for the future.

We thank you for the vision of the men and women who worked and gave their time and talents so that the cathedral could be built. Thank you for the loving sacrifice which has been shared over the years. Grant that our Cathedral may be a blessing to all who work here or visit. Amen.