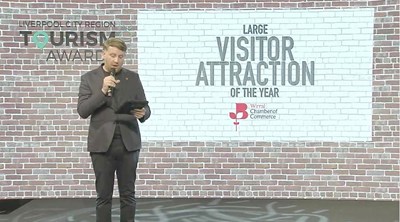 I know people keep saying it, but it has been a really strange year – a strange and deeply unnerving year for most of us.  Having said that, in a crisis you find out who your friends are.  This year we’re seriously beefed up the numbers of meetings we’ve had with LVEN (Liverpool Visitor Economy Network) – one of the boards on which I sit representing the cathedral and bonds between the partners have been strengthened in these months of adversity. The visitor economy as many will know, is an important sector for Liverpool City region – one of the most important in terms of bringing tourists (and of course much needed revenue) into the city.

The Liverpool City Region Tourism Awards in a normal year is the high point in the visitor economy calendar and a great night out.  It took place tonight (Tuesday 10th November).  This year was always going to be different.  No big glitzy ceremony at the cathedral in 2020 for several hundred people - no big schmooze afterwards.  This year, the event happened several months after it was originally due to happen (originally scheduled for May but postponed for obvious reasons) and was taking place on Zoom.

Let’s face it Zoom and Teams have been life-savers for us all, but (generally speaking) they don’t replicate what it actually feels to be there in person.  I’m sure many people were greeting tonight as it “wouldn’t be the same” or words to that effect.  I mean no disrespect by that – people in this city region are massively sociable and love a party and this wasn’t going to be the great get together than a normal awards night would be.

That’s what I thought – if I’m honest.  The funny thing about it is that (despite not winning our category) I thought it was a really great event.  Well done to Knowsley Safari Park by the way who won our category (Large Visitor Attraction) as they have worked extremely hard over the last few years to create a great attraction.   Well done too to the Growth Platform for pulling all this together in truly challenging times.

Tonight was a great event for me as it totally summed up the Liverpool spirit.  It had some moments of humour, it was big-hearted, it was friendly, it was collaborative  and it was indomitable.  We know it has been a tough year, but everyone who spoke tonight said they were up for building back and coming back stronger.  When you hear that from all the winners, it makes you very proud to be part of this sector, in this part of the world.

What was also great to see is that all the winners were all gracious and all acknowledged their fellow nominees as having worked hard too in what has been a testing time for the whole sector.

Tonight was different.  It isn’t the way we want to do the awards every year, but it showed what is truly great about the tourism sector in the city region.  It makes me enormously proud of the sector and the region we work in.  It also made me think that, with people like this, we were ultimately, as a sector going to be ok.

Roll on 2021 and a year when we can build back and breathe some life back into our visitor economy.  With great people working in it like I saw tonight, we’re going to get through this.

While you're here:
Why not prepare for next Sunday's worship? Our preparation sheet for adults and for children can be accessed by clicking on the Resources tab of our prayer blog, Prayer for Liverpool: https://www.prayerforliverpool.org/prayer-resources.html.