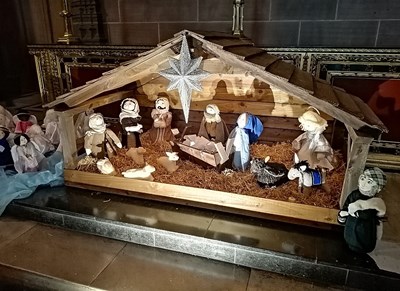 I was never Joseph, nor the Angel Gabriel nor even a wise man in Nativity plays at school. My acting ‘debut’ was as a slightly dishevelled shepherd at Infants School, wearing a stripy tea-towel for a head-dress. (It’s rather sad that I remember these details!)

My ‘big break’ came at the tender age of seven, in first year Juniors. I was asked to be Moses, top of the bill, in a school assembly about the Ten Commandments. (It wasn’t quite on the scale of the Cecil B. DeMille film of the same name by the way!) I can remember spending hours making two tablets of ‘stone’ (aka large pieces of cardboard) which were painted a yucky grey colour and over-written with random spidery scribblings that were supposed to represent the original Hebrew, I suppose. Came the performance, at the right moment, I came charging down the ‘mountain’ (stairs to stage left) in order to rant at the assembled company having a party on the floor of the school hall. This I did with serious over-acting and going bright red in the face. Then, as I was about to slam down the tablets, I realised to my horror, that I’d left them at the top of the ‘mountain’! So I charged back up to collect them, stomped noisily (and even more red-faced) back down again. With great gestures, I flung the tablets on the floor, whereupon they wafted up and down right across half the length of the school hall – eventually coming to rest against the climbing bars at the side. The whole place dissolved into uncontrollable laughter and I burst into tears and ran back up the mountain. I really don’t remember what happened after that – I must have been so traumatised by the whole thing. Perhaps I still am! ‘Treading the boards’ has never been something that has attracted me ever since. Although it’s slightly ironic that I ended up as a Vicar!

Whether or not you are a natural actor, we are all invited to enter into the drama of the Christmas story. Maybe you never made it to the dizzy heights of being Mary or Joseph when you were younger. But we can, with our God-given imaginations, enter into the Nativity story afresh this Christmas, with wonder and with a willingness to learn.

Mary, famously, said ‘Yes’ to God. Even though her whole life was about to be totally turned upside down. And despite the fact that huge risks were associated with what she was about to experience not least social ostracization. People were bound to jump to the wrong conclusions about her new situation. Joseph too, listened to the angel, who told him to go ahead with marrying Mary, caring for her and for the baby that was to be born. A baby that was neither his nor would be named after him. For Mary and Joseph, there was no acting here – this was whole-hearted action, in accordance with God’s requests.

The faithfulness and obedience of Mary and Joseph at a time of total upheaval and great jeopardy in their lives is surely a source of inspiration to us this Christmas. Two years ago, there were some 50-60 cases of a new strain of coronavirus reported in China; the rest, as they say, is history. It’s a history that is still very much being written around us. It’s becoming quite evident that these last two years have already caused such a cataclysm around our world such that we will never be the same again. We have had our worlds turned upside down. That will inevitably produce grief because we can never fully return to what we had before Covid – some things have changed irrevocably. Just as in any grieving process, this will affect different people in different ways. Our paths to recovery will be many and varied.

What can help hugely is to face the future with God, and alongside his people. Mary and Joseph must have been fearful and bewildered at what the ‘new normal’ would be; little could they begin to imagine what would happen in the coming months, let alone years. Mary could never have foreseen that she would one day watch her son being executed. Nor see him come back to life. But they entered fully into the drama that God was unfolding around them. This was no play-acting – this was the real thing. Their trust in God, and their hope for a future where God’s purposes would become front and centre of their lives, are things that can speak to us across the centuries.

So, what will the Christmas story have to say to us this year? Is it about being an actor in an imaginary play (literal or in our imaginations) which we will quickly forget for another year once December has passed? Or is it about the actions that flow into and through our lives because of the Christmas story, and which will live with us into 2022 and beyond? Actions that can make a real difference to our lives and the lives of those around us; especially at a time when there is so much fear, frustration, anger and despair around us.

If, after Christmas, you are wanting to explore the drama further, and its implications for our world and our lives, then why not consider attending Alpha On-line, which begins on Wednesday 26th January? It’s a very relaxed and informal look at the main claims of Jesus and the Christian faith. No question is off-limits. And being on Zoom, anyone with access to the internet can join in from anywhere. For more details, please click here.

We’d love to welcome you. Whatever happens, may the story of the birth of Jesus speak with power and comfort to you and all those whom you love. It’s not just acting – it’s about God’s actions, which changed the world irrevocably!