Canon Cynthia looks back at her time at Liverpool Cathedral 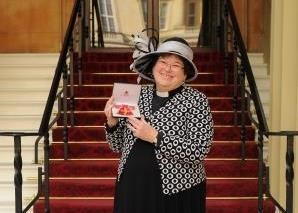 We spoke to Rev. Canon Cynthia Dowdle before her retirement this November. Cynthia has been Dean of Women's Ministry at Liverpool Cathedral since 2001, combining this role with that of Canon Chancellor.

Cynthia has given pastoral support to clergy and licensed ministers and those seeking ordination, particularly women - now a third of our clergy. She also has focused on social justice, equality and inclusion.

We asked how she is feeling approaching her retirement?

“I have mixed feelings. It is a sad time, breaking ties with people, across the Diocese of Liverpool and nationally. I have been having the last meetings, saying goodbye to people I have worked with for many years. I will of course keep everyone in my prayers. It will be strange to get used to worshipping in the congregation again, rather than leading the service.”

Previously having had a career within teaching and having been a head teacher, she answered God’s call to ordination and was among the first women in the Church of England to be ordained back in 1994. Speaking of when she first knew she was being called by God, Cynthia said;

“I was on pilgrimage in the Holy Land beside Lake Galilee. It was very early in the morning and the sea was a calm pearly grey. I heard a voice and it was God asking me to take care of his sheep. Initially it was a frustrating time, I knew I was being called but there were limited paths available and no ordained women. It took another few years before attitudes changed and the door was opened for me.”

Cynthia started off in parish ministry before coming to the Cathedral. We asked her what her ministry like in the early days and how does it compare to now?

“The main difference I have found was in a parish setting, the incumbent is responsible for everything that goes on within the parish whereas in the Cathedral, my role is shared with other staff and volunteers having more involvement. It would be impossible to do everything yourself, you have to take a step back.”

Cynthia was recently honoured with an OBE for services to gender equality and social inclusion. We asked how it felt to collect her honour.

“The day was bit like a dream. Typically, it was pouring with rain! It was a brilliant day where I met some wonderful people also receiving honours. Princess Anne spoke to me about my work on gender equality and of her visits to Liverpool Cathedral. I accepted the honour not only for me but also for all those I have worked with both women and men who believe that the Church of England is in a better place now women priests are seen by most as the norm. Receiving the honour affirms this to me and I hope others will be affirmed by it as well."

What of the other memorable moments in Cynthia’s time at Liverpool Cathedral?

“There have been many. Representing the Church of England at the consultation on the status of women at the United Nations and attending the International Anglican Women's Network gatherings at the Tutu centre in New York have been highlights. My involvement with the Josephine Butler Trust, the War Widows Service, the welcome services for Dean Pete and Bishop Paul, being invited to speak & celebrate communion at Cathedral Day by the Mothers Union and the journey of the Passion Plays, which are now an annual feature at the Cathedral. Finally, Hope+ Foodbank has been wonderful to be involved with, much needed and so well supported. As well as the stand out events it has been a privilege to simply celebrate communion during the weekly Tuesday morning Eucharist at the cathedral.

Cynthia and husband Ultan Russell (Diocese of Liverpool) will be retiring together so what does the future hold for them?

“I have to take at least a 6 month break from ministry as is the protocol when clergy retire so I am waiting to see what happens really. Ultan and I are planning to travel and to stay with friends in Massachusetts, Boston and California and then on to Australia before returning home to Liverpool. I’d like to continue to mentor and be involved with Clergy selection panels.”

Finally, we asked how Cynthia’s relationship with God developed over the years.

“I feel much more at ease with God as the years have passed. The way I pray has evolved from being quite wordy to focusing on meditation and contemplative prayer.”