Cathedral's own Alexander is a BBC Chorister of the year Finalist 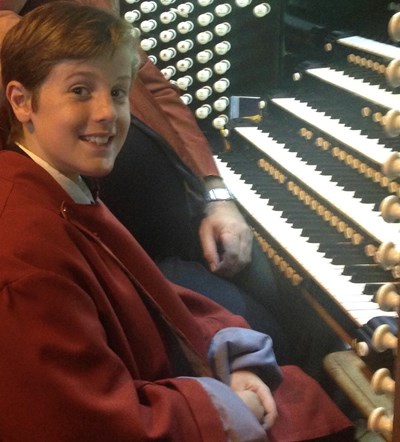 We are proud to announce that one of our own Choristers from Liverpool Cathedral has won a place in the BBC Chorister of the year final, taking place on the 20th October 2018.

Alexander Joseph Leatherbarrow, age 13, is our Deputy Head Chorister. He is the longest serving and most experienced chorister in Liverpool Cathedral choir at present. Alexander has remained a dedicated chorister and lover of choral music with this Christmas being his seventh year. Over the last two years Alexander has represented the cathedral choir at a number of events including the Great ‘Jubilate’ Choir held at St Paul’s cathedral in support of the Diamond Fund which is helping to keep choral music in the nation’s cathedrals.

The Great Choir consisted of a chorister from every cathedral in the county being chosen to represent their cathedral. Once again Alexander kept Liverpool Cathedral at the fore as he was chosen out of all the different choristers to sing the solo part for ‘Miserere’, sung from behind the altar in the Jesus chapel. He also appeared on a recording with the Great Choir and Aled Jones to aid the diamond fund which went straight to number one in the classical charts.

More recently he has performed the solo part in Chichester Psalms at the philharmonic as well as performing at Liverpool Cathedral’s own ‘Big Sing’, and other events throughout the year.

Alexander maintains a long musical family tradition with both his great Grandfather and great uncles being part of the cathedral choir.

When we asked Alexander about music his reply was “I cannot help but sing, I do it all the time. Music makes sense of the world for me, I love it! I’m learning to play the piano too and I’ve just started to learn organ, which is amazing.  Choir is really important to me, and I have had some great opportunities which have only come about by being part of the choir. Being part of a choir means we sing as a team. We look after each other and we get to go to some great places too.”

Alexander was asked what he was looking forward to most at the final:

“Meeting other choristers and singing for some amazing composers and judges and trying to win of course!”

The Final takes place on 20th October 2018 and is being recorded live on BBC radio 2.