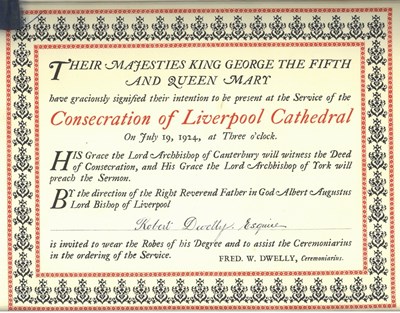 “We fling the doorway open to the crowd,

That they may enter to the place prepared,

For lonely worship, with the Spirit bowed,

Or ecstasy of adoration, shared.

Thus we, with doorways; longing, that in us,

Lighten our hearts within us, and abide.”   John Masefield

Liverpool Cathedral was consecrated on July 19th 1924. As we celebrate the occasion in 2022 we can look back on the preparations that were made in 1924 and continue to follow in the same tradition.

The preparations began in June to make ready for the Hallowing of the Cathedral as the Bishop sent a letter to every church requiring them to pray. From July 14th, prayers were said daily in the Lady Chapel. On Friday night, the eve of the Consecration, each of the 12 Deaneries were responsible for 1 hour of the Watch. Prayers and meditations began at 6 p.m. and concluded at 6 a.m. As the final Deanery emerged from the Lady Chapel to a bright sunny morning almost 5000 people meditated on the themes of “The Cathedral”, “The Bishop and Clergy”. “The Faithful” and “The City, the Country and the World.”

All the services were set out in precise detail by Reverend F W Dwelly the Ceremoniarius. The congregation were asked to be in their seats by 1.50 p.m. After the Bishop and his chaplains had inspected the building the Lord’s Prayer was said and the congregation was left to prepare for the worship and ceremonies. As the first notes of the newly installed organ echoed around the building the first of the processions entered the Cathedral. At the same time the Bishop stood outside the central doors to say the words of the 1st prayers before knocking on the door with his crozier. As the knock was unanswered the Bishop’s procession continued to circle the exterior of the building before pausing to mark a consecration cross on the North wall which would be carved into the stone. Until this moment all the timings set by Reverend Dwelly were adhered to, unfortunately King George and Queen Mary arrived early. After a discussion when Reverend Dwelly told Lord Derby that the service was for “Almighty God not for the King!!” their Majesties agreed to wait. In fact the delay gave the King an opportunity to inspect the youth organisations lining the route. The Queen took the opportunity to enter the Cathedral and was able to watch the procession of clergy as they entered the Cathedral.

In 2022 we may not have royalty attending the service of Consecration but we do continue to follow the programme set by Reverend Dwelly. The service opens with words by the poet John Masefield. Then the choir, at the High Altar, and cantor, on the Dulverton Bridge, sing The Rejoicings, written in 1924 by F W Dwelly with music by Martin Shaw.

After the sermon we remain seated for the motet, Locus Iste, “This place was made by God, a priceless mystery; it is without reproof”, during which the youngest boy chorister (with surplice): Francis Marsden traces the A  Ω , Alpha Omega, Consecration Mark in the central crossing, the youngest girl chorister (with surplice): Isabelle Lucas places a lighted candle on the Scott memorial, and candles are lit at the consecration mark at the south-east corner of the Presbytery and at the Foundation Stone.

The consecration of Liverpool Cathedral: the services of the Octave. 1924