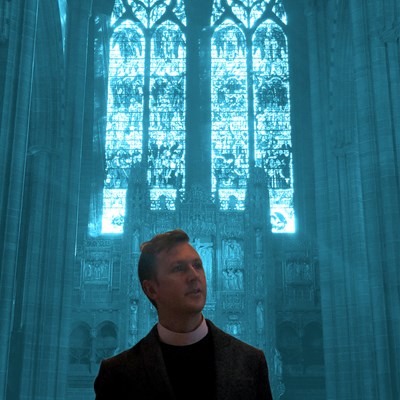 Last Spring, when the Cathedral was open only for public worship, due to Covid restrictions, one very hopeful sign of the fullness of its life returning came when the BBC filmed some sequences in the great space. It was all very hush-hush, but the word was it was for their hugely successful interwar drama, ‘Peaky Blinders’. And now we know it’s true, as the final series has been released, with publicity shots showing actor Cillian Murphy standing in front of what is the unmistakable East Window of Liverpool Cathedral. It’s a scene in which two of the drama’s murky characters seek the light.

This was the crowning achievement of artist John William Brown, (1842-1928), pre-Raphaelite and sometime associate of William Morris, the artist and father of the Arts and Crafts Movement. Facing South, and therefore, the sun, it was originally much more luminous than it is today. The keen-eyed will have spotted that a large net hangs inside the glass, above the high altar, a long-standing ‘temporary’ solution when it was discovered that it needed repairs, a generation ago. The net is now dusty, and the glass behind it in need of a clean, so it makes the whole Presbytery and Quire a darker space than intended. As we approach the centenary of the Cathedral’s consecration the restoration of the stained glass is an important part of our ongoing conservation work, securing the building for the next century.

The subject matter of the East window is the canticle ‘Te Deum’, traditionally sung at Morning Prayer. When the Quire was built this was still the most popular Anglican service. The ancient hymn describes the angels, saints, and us, gathered together in worship, by God’s grace. At the foot of Brown’s window stand modern figures, and below them, us, presenting ourselves at the altar, we join the company of heaven by the gift of the Spirit, praying that our darkness would be scattered by Christ’s eternal light.