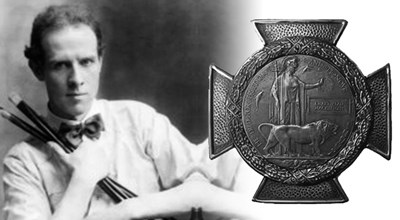 From the 11th September to 7th October, Liverpool Cathedral will conclude it's series of exhibitions to commemorate the Centenary of the First World War.

Visit the Memorial Chapel to view the work of Edward Carter Preston, medalist and sculptor and the Embroiderers’ Guild 100 Hearts Exhibition.

Edward Carter Preston is an artist whose distinguished career has left a valuable artistic heritage to his hometown of Liverpool. He was multi-talented in painting sculpture and commercial design. During the two World Wars, he designed commemorative plaques and medals for the fallen and their families.

He was responsible for the design of the bronze plaque known as the “Next of Kin” plaque or “death penny”, The Distinguished Flying Cross, The RAF Cross and Medal. He had entered a competition in 1918 under an assumed name to design the medal for the fallen.

Other designs include the Gallipoli Medal and the Jutland Medal as well as a memorial for the Roll of Honour at the Liverpool firm of Elder Dempster.

He collaborated with Dean Dwelly and Giles Gilbert Scott to incorporate many sculptures in Liverpool Cathedral which reflected his style and talent for design.

The 100 Hearts Exhibition is part of a nationwide exhibition by The Embroiderers’ Guild that has been displayed in several cathedrals. Liverpool Cathedral will be hosting the display during their WW1 exhibition in the Memorial Chapel.

The Embroiderers’ Guild invited members to take part in the commemoration of the ending of WW1 100 years ago by stitching a 3d heart. They were invited to create their own design to cover all or part of the front face of the commemorative heart and, possibly, the seam. Find out more here.