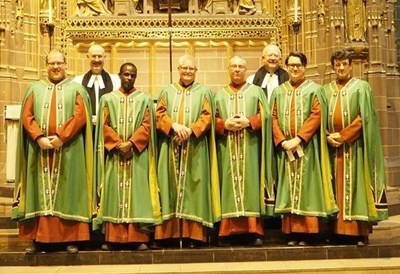 Congratulations to the five, who were admitted into the Liverpool branch of the Guild during yesterday's Evensong.

The Guild has been supporting the role of vergers in all churches in the C of E since 1932.

Gratten Williams, Chairman of the Liverpool branch said "I'm delighted that Dave, Jonathan, Graham, Jack and Carlos have joined Tracey and myself in the Liverpool Branch of the Guild.

As Chairman of the Liverpool branch I will encourage the Cathedral vergers to take the opportunity the Guild offers for training and for forming new friendships both within and outside the diocese of Liverpool."

Visit the website of Church of England Guild of Vergers here.