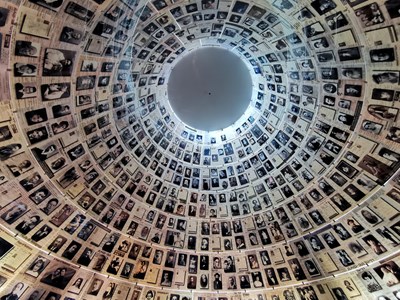 Photo by Snowscat on Unsplash

For well over twenty years, since I met and married my wife, I’ve measured our years together celebrating the major Jewish festivals from Pesach in the spring to Hanukkah in the Winter - with the High Holydays in between.  Every year I fast on Yom Kippur (The Day of Atonement) and many times we’ve decorated the sukkos at Sukkot (a festival akin to the Christian Harvest Festival).  My wife and two children are Jewish and the kids were educated up to the end of primary school in Jewish schools.  I remember as if it was yesterday, when my first child delivered most of the service during her bat mitzvah in synagogue, in Hebrew.  I love the rich traditions and the warmth of the close community which we’ve been a part of for many years.  I’m also acutely aware of some of the challenges.  Not least when, periodically the primary school the kids went to received anti-semitic threats and had to have security daily to protect the children. The very fact that this is necessary in the UK in the 21st Century is sobering.

Another marker in our year, in the calendar, has been Holocaust Memorial Day.  This year the focus is: “Be the light in the darkness.”  This feels like a particularly apt theme.  Not because the people of the world are going through difficult times at the moment – although that certainly adds to the power of the message.  It is also particularly pertinent because, from what I’ve read of the theme, it is about being a beacon of goodness and kindness.  This isn’t always easy as we know.  These are adversarial times, where hate and division seem to be on the rise.

I recognise that Holocaust Memorial Day, whilst, for me evokes the murder of Jewish people between 1941 and 1945, it is also about the Khmer Rouge’s murder of millions of Cambodians, the violence which resulted in approximately one million people dying in Rwanda in 1994 and the civil wars in Bosnia in the mid-nineties and Darfur in the early 2000s.  All of these horrific incidents in our recent past are referenced on the Holocaust Memorial Day Trust’s website (www.hmd.org.uk) which I urge everyone to visit.

I’m particularly conscious not to portray the Holocaust as merely a metaphor for evil and to heed Karen Pollock’s advice in the Jewish Chronicle recently when said: “While we want every young person to know about the Holocaust, it is important that they do not see every other event through that prism.”  The Holocaust, whilst it does resonate with many is often used widely as a synonym for evil, rather than real event (often referred to by Jewish people as “Shoah”).  We shouldn’t forget that these were real events in our recent history.  It feels worth re-stating that the Holocaust is still very real and visceral for many people – not as a metaphor for environmental disaster or the pandemic – but as an event where millions of people were killed.

My wife’s maternal grandparents both escaped the Nazis.  Her grandmother Eve was put on a train from Austria in the 1930s as a teenager, finding her way via London eventually to Glasgow, where my wife was born.  Her grandfather escaped out of former Czechoslovakia, also arriving in London where the two met. When my wife and I visited Yad Vashem in Jerusalem some years ago we found the name of her great grandfather Leo Adler (her grandmother’s father) in the records as having been killed in the concentration camps.  That day the reality of the Holocaust was brought home to me as I watched my wife read the time and location of his death.

Marking any brutal event in our history is often fraught with difficulty.  No doubt, we can all think of plenty of examples when it has been done well and when it hasn’t. This brings to mind Richard J Evans recent piece in the New Statesman on the proposed new London Holocaust monument which gives a pretty good precis of all the things that can and do go wrong when various groups weigh in.  Getting the appropriate tone for any commentator in the public realm is extremely difficult - something I thought long and hard about with this blog.

That said, it is perfectly normal and acceptable for us all to try and contextualise things which move us and for us to try and find ways to educate ourselves.  Holocaust Memorial Day can be an opportunity for us all – regardless of our particular faith or lack of faith - to think about humanity and decency and about being the best person we can be.  By looking at the worst things that human beings can do to one another, it can and should strengthen our efforts within ourselves to be better.  To think about the murder of innocent people and choose love and tolerance over hate and division; to look at what unites us rather what than divides us and to look at putting ourselves in the shoes of others.

I leave the last word to the Holocaust Memorial Day Trust:  “Increasing levels of denial, division and misinformation in today’s world mean we must remain vigilant against hatred and identity-based hostility. Rapid technological developments, a turbulent political climate, and world events beyond our control can leave us feeling helpless and insignificant. The utterly unprecedented times through which we are living currently are showing the very best of which humanity is capable but also - in some of the abuse and conspiracy theories being spread on social media - the much darker side of our world as well. We can all stand in solidarity.”

Holocaust Memorial Day takes place across the world on 27th January and marks the anniversary of the liberation of Auschwitz-Birkenau, the largest Nazi death camp.

While you're here:
Why not prepare for next Sunday's worship? Our preparation sheet for adults and for children can be accessed by clicking on the Resources tab of this website: https://www.prayerforliverpool.org/prayer-resources.html.