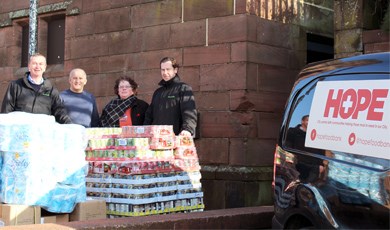 A particularly pertinent donation on the eve of fourth anniversary.

On the eve of their fourth anniversary, Hope Plus Food Bank took  delivery of 5,000 items, donated by Horseradish, one of Liverpool Cathedral’s catering suppliers. They agreed to make a donation for every meal served. Their parent company Chester Race Company agreed to match this.

Since their partnership began in 2016, Horseradish has delivered over 2,759 meals to guests dining at a variety of events at Liverpool Cathedral. Speaking on behalf of Horseradish, Angus Wilson, Catering Manager stated

“Horseradish is committed to supporting charities, particularly those aimed at helping the local community. As part of our promised commitment, we are thrilled to be in a position to support Hope Plus Food Bank and donate even more than initially promised, to a fantastic cause.”

“I am overwhelmed by both Horseradish’s generosity and also that of Chester Race Company.  It will make a huge difference to us, especially as for obvious reasons, donations can take a bit of a dip after the Christmas period.”

She went on to say:

“In four years we have provided over 34,000 food hampers, expanded our food range to include fresh fruit and vegetables plus bread, added toiletries, clothing, baby equipment, support services and advocacy. On top of that we’ve reported to two All Party Parliamentary Inquiries and contributed to research at a number of universities including Oxford and London.”