In Search of Tigers - Reflection by Canon Neal 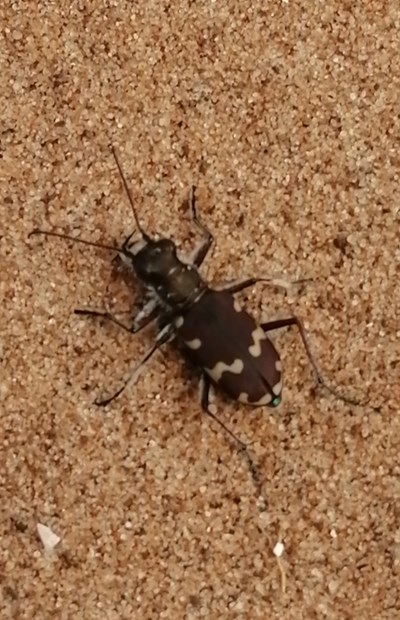 Meet one of our local ‘tigers’! Well it’s actually a Northern Dune Tiger Beetle and it lives just a few miles north of Liverpool, on the Ainsdale Nature Reserve. It’s one of the UK’s rarer beetles and, in the UK, it can only be found on the sand-dunes of the Sefton Coast, and on dunes in Cumbria. So it’s a bit of a special mini-beast, and it’s on our doorstep! It’s called a Tiger Beetle, I assume, because of its stripes. But it’s also, like a tiger, a ferocious predator, perfectly adapted for skittering across the sand to intercept hapless insects and caterpillars that might stumble across its path. I have managed to find them on a couple of recent visits to the reserve, which is when I took this picture. Mind you, it’s a bit of a sun-worshipper, and only comes out when the sun shines and the temperature of the sand is hot enough. But then if it gets too hot, it retreats to the shade. (Sounds like a few humans that I can think of!)

As a child, I recall that I approached tigers with a mixture of admiration and fear. They are stunning creatures close-up of course, although seeing one padding disconsolately round and round its tiny cage in London Zoo in the 1970s didn’t really live up to expectations. Thankfully, that kind of captivity is now prohibited in zoos, I hope. I was also introduced to tigers through being a Cub Scout and the Jungle Book. There, however, the tiger (Shere Khan) is the ‘baddie’ and so you will never find a Cub Scout leader named after him. At this point, I ought to say, in order to appease my Winnie-the-Pooh-loving colleague Canon Mike, that of course Christopher Robin’s friend Tigger is nothing like that – but playful and loveable and, well, “bouncy trouncy flouncy pouncy”.

The image of a tiger has been famously employed powerfully in advertising. There is a certain breakfast cereal which has a tiger called Tony as its main advocate who roars at every opportunity to tell us that ‘They’re grrrrrreat!’ And then there was a certain oil company which claimed that, if you filled up you car with their fuel, you were putting ‘A tiger in your tank’. And that phrase has entered our langauge as a popular idiom, symbolising a desire for determination and vigour – and perhaps even courage.

So, as I was watching the antics of our local ‘tigers’ I was pondering that perhaps we all need to find our ‘inner tiger’ just at the moment. As we continue to journey on through very uncertain territory and seek to find something vaguely solid and dependable on which to tread, we do need a ‘tiger in the tank’; that determination and courage to keep going and push ourselves into unfamiliar places where we feel wary and afraid.

A shining example of ‘tiger-like’ courage in the Bible is Joshua, the young man who took over the leadership of the nation of Israel as it journeyed for four decades in the wilderness from Egypt and approached the point where it was to cross the River Jordan and into the ‘Promised Land’. The people of God had not passed that way before, and were understandably anxious about the unknown challenges which lay on the other side of the Jordan, most notably anticipated hostility from the people already living there. But God said to Joshua, “Be strong and courageous; do not be frightened or dismayed, for the Lord your God is with you wherever you go” (Joshua 1:9). Despite the situation, Joshua trusted God’s promise and successfully led the Israelites to the place that he had prepared for them. It didn’t mean that life would be a bed of roses, but it did bring them into a place where they could flourish and be free to worship God in the way that he planned.

So it may be that you are not feeling like a  “bouncy trouncy flouncy pouncy” Tigger at the moment but I do pray that God will help you to put a bit of a ‘tiger in your tank’ this coming week. And, if you are quick, and the weather is right, you may just be in time to see the rare Northern Dune Tiger Beetles of Ainsdale and enjoy their antics, before they throw in the towel for this year and hunker down deep in the sand as grubs until the sun shines and it is hot enough once again!

While you're here:
Why not prepare for next Sunday's worship? Our preparation sheet for adults and for children can be accessed by clicking on the Resources tab of our prayer blog, Prayer for Liverpool: https://www.prayerforliverpool.org/prayer-resources.html.