It is always changing - Reflection by Canon Saro 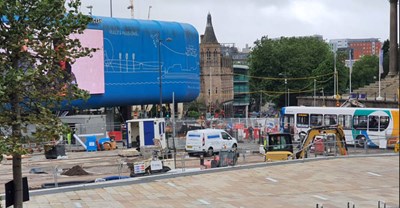 Enjoy this reflection from Canon Saro Esmaeili about how things are always changing, and how Liverpool has embraced change.

There is a section in the Museum of Liverpool that displays the history of Liverpool on a screen. It is around eight hundred years in one glimpse. Looking at the changes in the area during the centuries, just in one minute, makes it seem too easy and too quick. Now, let have a ride across the city. Down the Copperas Hill to Skelhorne street or passing Strand street, there are some small construction works and temporary traffic's diversion. It is noisy, time-consuming, and annoying. Neighbours are always complaining. It never ends on schedules; the building control delays it more, and so on.

Now we see that simple glimpse misleads us. Change is not that easy and quick. Years of planning and hard-working are required. Even when we are talking about the construction works, engineering operations, facilitated by science, deep knowledge, and thousands of years of experience in the background. The outcome is usually satisfactory; however, still, mistakes happen and, occasionally disasters strike, especially when the deadline is close and the client increases pressure.

Now, imagine you have just three days to build the Liverpool cathedral with its current kind of materials. It would be insane. Honestly, I do not know if it is entirely impossible; maybe you can find a company from China that bids on 2.5 days! But certainly not 2000 years ago, when disciples, baffled by Jesus's claim about the temple. Probably, you say that was not about the building, which is absolutely correct. But which one is harder to do or seemingly impossible? A super-fast construction project or rising from death.

I think the answer is pretty obvious but what I tend to see is commonality. Both require a great deal of diligence and dedication, sometimes great sacrifices, and sometimes extreme changes; of course, not for Jesus. I am speaking for myself. There is no perfect human, and it is not about perfection, it is about faith, and love, and hope, and repentance, and forgiveness, and all the needing changes in our minds and our behaviours.

I am living in Liverpool. This city has always embraced the changes and has been a pioneer in many cases. Just look at the following list of the firsts. The first British public art gallery, England’s first girl’s day grammar school, the world’s first overhead railway, Britain’s first Chinese newspaper, the first School of Tropical Medicine in Britain, the first cycling club formed in Britain, England’s oldest chess club, the first cast iron frame building in the world, the first football nets, and the list can go on and on.

Isn’t it amazing? Each of these first steps was the beginning of a revolution, a turning point in human history. Ok, let not be so dramatic; not all of them, but at least, some were revolutionary movements. Revolutionary or not, they all needed great courage, motivation, effort, or maybe sacrifice. It is more or less the same for all kinds of change.

Change is not easy. It would be much easier to stick to the old traditional ways. And do not jeopardise the tranquillity of routine life. But if we do not start any construction work, no temple will be built. Maybe we have to give up on some old habits, or some old friends who do not approve of our new ways or even leave our old place to follow a new goal/dream/perspective. Whatever it takes, there would always be a price to pay. As a wise man said, "What we ever hope to do with ease, we must first learn to do with diligence.”[1]