“It’s a bit like being Curate on an Ocean Liner” 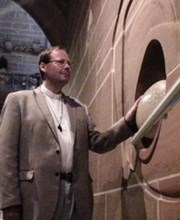 We said goodbye to our Curate Tim and his family on Sunday as he presided and preached at his final service. We send them with our prayers an blessings to Hove. Before he goes he spoke to us about his time here.

Rev Tim Watson has occupied a privileged position during his time as our first cathedral curate. “it’s been a really interesting learning experience witnessing the cathedral change”, he reflects, “and as Curate I have uniquely seen all aspects of this place engaging with a variety of people from concert goers to regular worshippers.”

Tim and his wife Kate found themselves landing in Liverpool at a time when our cathedral, under the direction of Dean Justin, was looking to engage ecumenically in the religious life of the city. Being part of the Roman Catholic Chemin Neuf community. Tim was being ordained as part of the community that has a strong ecumenical focus, a community that saw God moving them in the direction of Liverpool. His curacy gave him the space to explore how this could work whilst he was also exploring how the church of England works with his placement at the cathedral as well as at St Anne’s Stanley & St Paul’s Stoneycroft.

Tim and the community made a significant impact on the cathedral and Liverpool. Two areas stand out. Firstly the community’s involvement in Holy Week in 2012: the privilege of praying and leading the Good Friday meditations were extremely well received. This was built upon with Tim and the community’s involvement in steering the Pentecost celebrations in 2014 where through prayer, worship, lectures and outreach they saw people come together across the city.

Tim is very upfront about prayer, being creative with these opportunities and enabling people to have a personal encounter with Christ. “The cathedral is in a great position to turn tourists into pilgrims and it is something we do well”, he believes. He values the fact that every event sees a welcome from a clergy person: “people haven’t just hired here for a rock concert”, he contends, “you come and experience the wonder and majesty of this place and we have to make that experience reflect God.”

Tim relishes the busyness of the place. “It’s like being curate on an ocean liner – there’s a great deal going on in a place which is visible and iconic for the city.”

Tim will take what he has learnt to the Diocese of Chichester where, along with the Chemin Neuf community he and Kate will be breathing new life into a church in Hove and seeing what possibilities are there for mission and ministry. Alongside that Tim will work for the diocesan staff helping with their ministerial education – developing a love for theological education that saw him do great work with the School of Theology here.

Tim has clearly learnt and reflected a lot on a rich ministry in Liverpool. From being parachuted in by the Holy Spirit he has been part of a cathedral in transition and a cathedral working out its role and value in a secular society. But it has been the ability to get alongside people on their spiritual journeys that Tim has valued most: “I have had the honour of witnessing some amazing faith journeys and hopefully helping people on their way. My prayer is that through my own weaknesses I can testify to God’s grace.”

Tim is pictured next to the Sheppard Memorial which he chose partly to reflect the ecumenical legacy of the Sheppard Worlock era but also because the quote from Jeremiah illustrates the role that Tim sees the cathedral does and should have in the life of the city.