Join our massed choir and feature in the performance of ‘The Armed Man: A Mass for Peace’ 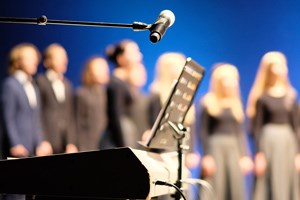 Stephen Mannings, Director of Choral Outreach at Liverpool Cathedral is looking for accomplished singers to join a 200-strong massed choir to perform in a production of Karl Jenkin’s 'The Armed Man: A Mass for Peace' in November.

Stephen Mannings, Director of Choral Outreach at Liverpool Cathedral is looking for accomplished singers to join a 200-strong massed choir to perform in a production of Karl Jenkin’s 'The Armed Man: A Mass for Peace' in November.

This poignant yet powerful piece pays homage to those who lost their lives in the Kosovan War. It describes the build-up to war, the war itself and its consequences, combined with a strong plea for peace.

“As we approach Armistice Day 2019, we will be staging one of the greatest and most infamous, musical works of the 21st Century - 'The Armed Man: A Mass for Peace'. We’re looking for people to be part of this production. If you join our massed choir, you will be performing this powerful piece in our breathtaking building. It’s a once in a lifetime experience.”

Singers need to be over 18 and familiar with the work, will join cadets from the Army Reserves, the RAF Air Training Corps plus soloist Danielle Thomas. They will be accompanied by a 14 piece instrumental ensemble in the performance.

Karl Jenkins is one of the most performed living composers in the world. Educated at Gowerton Grammar School, Cardiff University and the Royal Academy of Music, London, The Armed Man: A Mass For Peace alone has been performed over 2500 times in 50 different countries since the CD was released while his recorded output has resulted in seventeen gold and platinum disc awards.

His style and integrity has transcended musical boundaries encompassing jazz-rock with Soft Machine, the global ‘crossover’ phenomenon Adiemus, soundtracks for Levis and British Airways, while stopping off along the way to score a Kiefer Sutherland movie, be a castaway on BBC “Desert Island Discs”, be featured by Melvyn Bragg on the ITV seminal South Bank Show and be awarded the Freedom of the City of London. Recordings include Requiem, Stabat Mater, Quirk, Stella Natalis and The Peacemakers, on Deutsche Grammophon Adiemus Colores, Motets and Cantata Memoria, and on Decca Symphonic Adiemus and the Piano Album. He has composed music for HRH The Prince of Wales, Sir Bryn Terfel, Dame Kiri Te Kanawa, Dame Evelyn Glennie and the London Symphony Orchestra amongst many others.

A Doctor of Music, he holds Fellowships, Honorary Doctorates and Professorships at five universities or conservatoires, including the Royal Academy of Music, where a room has been named in his honour. In November 2009 he was given the Cymru For The World Award and in March 2010 was honoured with the Hopkins Medal given by the St. David’s Society for the State of New York.

In 2015 he was confirmed as the most popular living composer in Classic FM’s ‘Ultimate Hall of Fame’ and holds the Classic FM ‘Red f’ award for ‘outstanding service to classical music’. He was awarded a Knighthood in the 2015 Queen's Birthday Honours for "services to composing and crossing musical genres".