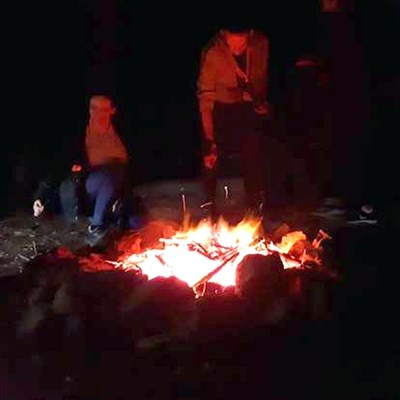 In July I had my first experience of participating in the Cathedral’s annual ceremonies around the anniversary of the consecration, giving thanks to God for the ongoing witness and worship of the Cathedral Church. At the heart of the traditional commemoration are our choristers. They sing a beautiful, haunting anthem by the nineteenth century German composer Anton Bruckner, setting ancient words, ‘Locus Iste, Deo Factus Est’, ‘This Place is made by God’. And while those words and music permeate the building a candle is lit by the Scott Memorial, giving thanks for the man who had the vision to design this great house of prayer, and the consecration marks on the floor are traced, carefully, with love.

This September the choristers, choir guardians, and members of the Music Department staff spent a happy few days in North Wales at Colomendy, the camp in the Clwydian Hills built just before the Second World War as an educational centre for the children of Liverpool. Generations have stayed there in the chalets and dormitories, from wartime evacuees to the present day, exploring the woods and hills, and breathing in the beauty of the landscape.

The first evening of the choristers’ stay involved gathering, under careful supervision, around a campfire in the woods at dusk. Some of the children had never seen a real fire before in their lives. As the light faded, and the sparks danced in the air they told jokes, were led in funny songs, and then, as the darkness deepened, amid the laughter a voice piped up with Bruckner’s lovely music. On the first attempt it quickly became apparent we’d plucked the wrong key out of the ether, so, starting again, the voices of our young singers formed one glorious sound, for a minute or so, focused on the fire, and celebrating the gift of music, and the bonds of love and friendship that bind the choir together.

Several of the choristers will be moving into the Cross Guild at Evensong on Sunday 3rd October. Pray for them, and thank God for their joy.