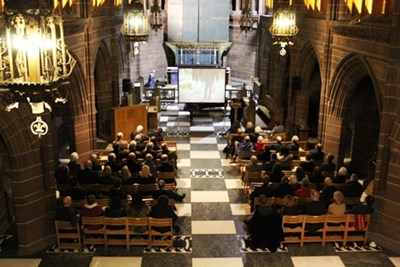 Set up by Liverpool Cathedral, Liverpool Metropolitan Cathedral of Christ the King and St Bride’s, the new charity aims to help people out of poverty.

On Tuesday 20th February, Micah Liverpool held a successful launch event. Featuring the magnificent Lady Chapel as the backdrop the event was the opportunity to explain the new charity's purpose and what they hoped to achieve.

Set up by Liverpool Cathedral, Liverpool Metropolitan Cathedral of Christ the King and St Bride’s, Micah Liverpool aims to help people out of poverty. Currently, the charity is working with those who are unemployed or need food or related assistance to tackle hunger in an emergency situation.

Executive Director Paul O’Brien welcomed the guests including board members, partners and volunteers.Chair of the Micah Liverpool board of trustees, Canon Ellen Loudon, explained the charity’s background and praised the work of both projects currently running. She also spoke about the mission of Micah Liverpool and how it will fulfil the social justice work of both Liverpool Cathedral and Liverpool Metropolitan Cathedral.

Liz Collinge, Director of HR at Andrew Collinge Hairdressing, spoke about her involvement with the charity. Liz started out as a Food Bank board member because of a desire to get involved with a project doing good work. It was at one of the board meetings where she heard about the Volunteer Programme and has been keenly involved ever since, providing presentations on the importance of smart appearance at interviews and carrying out mock interviews with volunteers.

Rev Dr Miranda Threlfall-Holmes, Rector of St Luke in the City Team Parish, brought the event to a close with a blessing for the charity, its work and its future.

“Our ultimate goal is to eradicate the need for food banks. We would love to be able to engage with people earlier and be able to support them before they get to the point of crisis and then be able to help them back into employment or with benefits advice or whatever they need.”