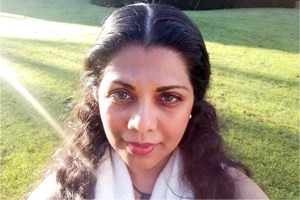 Dr Sanjee Perera, Archbishops' Adviser on Minority Ethnic Anglican Concerns, will be installed as an Honorary Canon at Liverpool Cathedral in December.

Dr Perera said of her appointment:

“More than two decades ago, when I first visited Liverpool Cathedral, I remember thinking it was like a great arc floating in the mists of the Mersey, anchored to this ancient maritime port city of migrants.

“Twenty-something years later, it is a great comfort to be anchored to this extraordinary vessel of worship that quietly marks the offices of the day, from morning prayer to evensong, calling a city to Christ.

“I am deeply honoured to be appointed as an Honorary Canon of the Greater Chapter of the Cathedral. Having lived in Liverpool for most of my life, this feels like a homecoming.

“I look forward to visiting often and attending Chapter meetings and services as regularly as possible. I look forward to finding refuge once again in this glorious vessel of prayer & worship, where so many migrants like me have found solace, sanctuary and home.”

Dr Sanjee Perera is a Cognitive Ecclesiologist and the current Archbishop’s Adviser on Minority Ethnic Anglican Concerns for the Church of England. She is an Honorary Fellow at the Universities of Durham and Chester, a visiting fellow at Coventry University’s Centre for Trust, Peace and Social Relations, and an Associate Fellow of the Open University’s School of Law. Her research brings a Cognitive psychological framework to Philosophy, Theology & Religion, particularly focusing on racialised stake holds in the Church of England. She is a trustee of BIAPT, SPCK and World Friendship.

She has served in national and local children and youth ministries from 1998 to 2015, from CPAS camps to deanery and parish contexts. She has served in the Diocese of Liverpool as a Pathfinder & CYFA leader, as a Sunday school teacher, Confirmation Director, in Youth & Student Alpha, and Chaplaincy work. She has also served in the diocese as an acolyte and as a parish chorister among other ministries.

Dr Sanjee Perera's installation as Honorary Canon is at Liverpool Cathedral on 9 December 2021 at 5:30 pm.