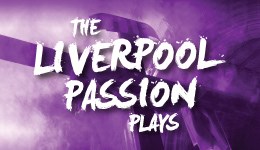 Returning for their fourth year, Liverpool Cathedral’s Passion Plays have attracted a growing following and a reputation for using our great space to fantastic effect in retelling the familiar story of Christ’s Passion.

Performed over four nights during Holy Week, the Passion Plays combine drama, liturgy and music, guiding audience members around the great space of the cathedral building to watch - and at points even become part of - the re-enactment of Christ’s Passion.

The spaces of Liverpool Cathedral will be used to dramatise Christ’s last supper, trial and crucifixion.

The all important dates are as follows:

The now infamous tag line ‘Whom do you seek?’ is inspired by the Quem Quaeritis Easter liturgy and the Visitatio Sepulchri (visit to the tomb) liturgical dramas of the medieval period. They will, however, reflect contemporary concerns and the cathedral community itself. It will again be produced by the Overcrofters, the cathedral’s youth group.

The building is dramatically used as a setting with the play using its lighting and architecture to add to the atmosphere. And even the Great George bell plays a role, mournfully tolling at the point of betrayal and Peter’s denial. Soundscapes introduce the performance establishing a tone for the piece making this a highly polished and professional production.

Speaking to the play’s co-author and Director Dan Bishop gives a sense of how the plays have grown and developed. “We have learnt and refined the plays each year,” explains Dan “as we see how scenes work, as we get a sense of audience reaction and as the cast grows and develops their confidence and understanding of the text. This keeps it fresh and exciting for the cast and a new experience for visitors.”

It’s a performance that can create many spine tingling moments as the audience is immersed in an action that happens all round them. This all leads to Dan’s favourite moment, the crucifixion. “It’s the emotional heart of the story. To see the crucifixion on the Dulverton Bridge creates a powerful, poignant moment for the drama. It never fails to move people”.

Roles move around between the cast enabling different members to experience new challenges and each brings their own perspective on the role they inhabit, a perspective which is often informed by their own faith.

At the centre is Dan whose quiet passion, alongside main writer Mark Lovelady, drives the play. “It’s about bringing alive a story that people know even if they don’t believe, in a creative, emotional and above all dramatic retelling.”