The Knife Angel brings us a message this Christmas 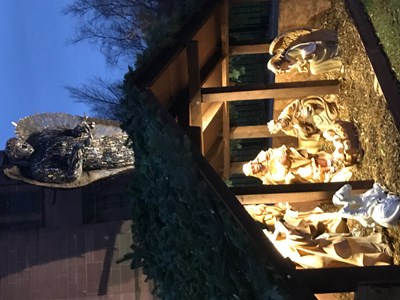 The Dean of Liverpool, the Very Revd Dr Sue Jones, gave her first Christmas sermon at our Cathedral at the midnight service. She talked about the significance of angels to the Christmas story and the important message the Knife Angel brings us

As I have journed through Advent I have spent more time than ususal focussing on the stable and the crib scene.

That reflection began before Advent when the men form the maintenance department began to build the outside crib.

The outside crib has probably been looked at more times in the past couple of weeks than it ever has done in the past because towering over it is the large knife angel.

As you walk up the drive to the cathedral, at eye level you see the crib and then as your eyes are drawn higher you see the enormous knife angel.

Both crib and angel play important parts in the Christmas story and the birth of Jesus.

The archangel Gariel seems to be the leader of the messagners. It is Gabriel who visits Mary, to tell her that she is about to be become Jesus’ mother. The angels physical appearance is not described in Lukes Gospel, but Mary is in no doubt about what she is hearing even though she might not understand.

Gabriel helps Mary understand. He gently answers her questions and through the gentleness of Gabriel Mary moves from fear to trust.

The angels in the Christmas story have to spend a lot of time reassuring people. It must have been a hard balancing act. On the one hand, they needed to appear in all their majesty so that people could really see that they were angels and so take their message seriously. And on the other, they did not want to frighten people so badly that they ran away.

Most of the Christmas angels start their message by saying ‘Do not be afraid, just as Gabriel did to Mary. Fear is a paralysing emotion and so the angels have to get the person beyong fear.

When Jesus is born, the angels are again saying Do not panic, do not fear, but this time to a group of grown men, the shepherds.

But unlike Mary they don’t just see one angel, they see a whole host of them. And a singing host at that.

Those shephereds must have been afraid! We tend to romanticize shepherds in the nativity scene and perhaps the author of Luke does a little bit of that too. But shepherds were most certainly not at the pinnacle of greater society in the day of Jesus' birth.

They were on the margins of society, eking out a living off the land. When they came to see the Christ child, Mary might have been a little concerned with their unkempt appearance, their earthy lives, and their relatively nomadic subsistence. They must have smelled of sheep and the toil of many days and nights.

There are many amongst us who would debate the validity of angels.  But I think angels come in many different guises and at many different points in our lives. They may come as the messanger of God through people and situations to help and enable  us to connect to God and his Son.

A number of people speak of co-instances and we in the church speak of God instances. The arrival of the knife angel is for me a God insadent. The fact that he came here to Liverpool Cathedral at this particular time of year is not a co-insidence.

The knife angel I think brings us a message.

For me he is saying, here is God born in the form of humanity. This is the mystery of what we Christians have called for centuries, "incarnation."

Jesus will grow up to show us a different world a world of peace and love. A peace symbolised and revealed in those outsretched arms of the knife angel. Those arms that say come to me all of you who are weary and I will give you rest, peace and love.

So this Christmas as you reflect on the message of the knife angel and lived out in the Christ child pray for a needy world and pray for love and peace in our broken needy world Amen.