Two more of our constables get the power of arrest 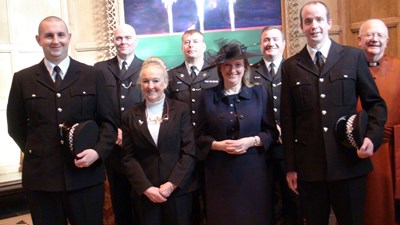 Two of our cathedral constables were given the power of arrest on cathedral precincts following a ceremony held last week.

Ian Gorry and James Crompton gained tghe powers at a ceremony, known as attestation, which saw them swearing a legal oath by a Justice of the Peace. They follow two constables. Les McKenna and Ian Crawford who were sworn in at a ceremony in Chester’s Consistory Court in 2015.

The powers enable our constables to maintain the security of the cathedral and its precincts more effectively which benefits worshippers and visitors alike. We expect that they will very rarely need to use them but they are helpful for the cathedral constables as they seek to carry out their duties.

All this is achieved in partnership with Merseyside Police and is carried out under the jurisdiction of the Cathedral Constables Association – which includes constables from Liverpool, York, Chester and Canterbury. Officers have to have undergone rigorous training and hold a level 3 qualification in Cathedral Constable Attestation to prepare them for this office.