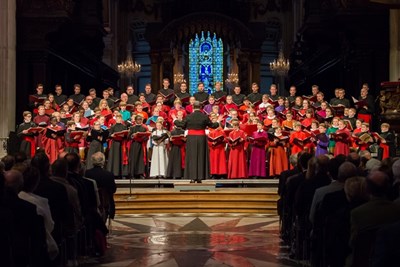 Young singers, including choristers from nearly 40 cathedrals and choral foundations will perform together in only the second concert of its kind on 13 June

Young singers, including choristers from nearly 40 cathedrals and choral foundations across the country, will come together to perform at Liverpool Cathedral on 13 June.

In only the second performance of its kind since The Cathedral Choristers of Britain formed in 2016, the concert brings together boys and girls from right across the British Isles from Bangor to Cambridge, Edinburgh to Exeter and from the Isle of Man to Norwich.

Rehearsing together for just a day before, the performance will demonstrate the extraordinary professionalism and sheer ability that mark them out as arguably the finest choristers in the land.

The concert, produced by Friends of Cathedral Music’s Diamond Fund for Choristers in conjunction with both Liverpool’s cathedrals, is a showcase for Britain’s 1,000-year-old choral tradition which is under pressure from rising costs.

John Rutter, the acclaimed composer, will speak at the concert which is being held in the presence of HRH The Duchess of Gloucester, royal patron of the Diamond Fund for Choristers.  Much-loved favourites like Handel’s Zadok the Priest, Allegri’s Miserere, Howard Goodall’s Psalm 23 (The Vicar of Dibley theme tune) and Parry’s I Was Glad will be performed as well as works by Fauré, Vaughan Williams, Tavener and even The Beatles, along with a new work by Richard Shephard specially commissioned for the concert.  All proceeds will go to the Diamond Fund for Choristers.

Launched in 2016 at St Paul’s Cathedral, the Diamond Fund for Choristers raises funds to support choristers and cathedral music departments in need. Grants so far totalling £140,000 have provided voice and instrument tuition, outreach and recruitment projects, and help pay choristers’ costs where the family cannot cope.

Lee Ward, Director of Music at Liverpool Cathedral said, “This is a tremendously exciting event for Liverpool Cathedral, and I can think of no better building to host such a large and distinguished set of choristers. It is fitting that we are joined by our colleagues from the Metropolitan Cathedral, as Liverpool has a fine track record of ecumenical collaboration. The concert will consist of wonderfully uplifting and joyful music, showcasing the very best of cathedral music and musicians. This city is justly famous for its friendliness and we look forward to giving a huge welcome to all the talented young singers and their supporters.”

The Cathedral Choristers of Britain in Concert

All proceeds will go to the Diamond Fund for Choristers.

Tickets are sold with unreserved seating in three blocks.