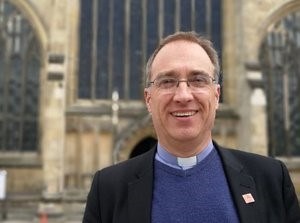 We are delighted to announce that the Revd Canon Dr Neal Barnes is to be our Canon for Mission and Faith Development. Subject to all the customary formalities, Neal will start in this role in July.

The Canon for Mission and Faith Development is a new role for the cathedral. It expresses our desire to create opportunities for our visitors, enquirers and committed Christians to encounter God. Neal will be looking at different ways to reach new people and to support them on their journey of faith. Neal will also be responsible for our Sepas and Zone 2 congregations.

Neal comes to us from Hull Minster, the closest Hull gets to having a cathedral. Formerly Holy Trinity Church, the Archbishop of York re-designated the mediaeval church as a minster in 2017, when Hull became City of Culture. This recognised the vast changes in the church which has had a complete reordering enabling it to be a focus for events, community service, and more varied worship services.

The Very Revd Dr Sue Jones, Dean of Liverpool said “Neal’s appointment is a significant one for our cathedral as we look to the future. We have great opportunities to reach people with over 750,000 visitors a year. We believe each of these can encounter God as they spend time with us and we want to look at how we can support people on a faith journey. Neal comes to us with an impressive track record in Hull and his gifts and skills will enable us to move forward as a cathedral. I look forward to welcoming him and Stella and pray for them as they plan their move to Liverpool.”

Bishop Paul added: “Neal is a skillful and able priest and he comes highly recommended from York Diocese. I’m delighted that he and Stella will be moving to Liverpool and enriching the Cathedral and the wider Diocesan community here”.

Canon Neal added “I am truly delighted to be moving to Liverpool to serve in the vibrant and embracing place and community of Liverpool Cathedral. In 2015, I was privileged to spend a couple of weeks here as part of a period of study leave, learning how churches had engaged with the 2008 Capital of Culture. I was struck by the friendship and welcome extended to me as a visitor. So imagine my excitement now that God has opened a door to move here permanently and join in with all that God is doing in and through Liverpool Cathedral. I look forward to getting to know you!”

Neal is married to Stella and they have two grown-up children, Sarah and Rachel. Following a career in industrial research and development, Neal served his Curacy in the Bedfordshire market-town of Biggleswade. In 1999 he moved north to become Vicar of Anlaby, a suburban village on the outskirts of Hull.  In 2010, the family moved to Hull, as Neal became the Vicar of Holy Trinity which in 2017 became Hull Minster.

Neal enjoys music-making (he plays the flute) and exploring the countryside. In 2015, Neal spent a couple of weeks in the middle of Liverpool, as part of his study leave, finding out how churches had engaged with the 2008 Capital of Culture and what had been the legacy. He is delighted that God has opened a door to come and live in this vibrant port city permanently and joining in with all that God is doing in and through Liverpool Cathedral.