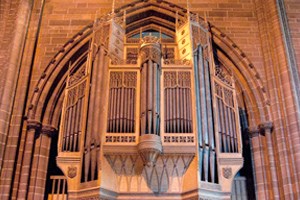 We're holding our second Mega Organathon Day to raise the last £300,000 in our £900,000 Organ Appeal and funds for the Cathedral Choir tour to Texas USA later this year.

Liverpool Cathedral will hold its second Mega Organathon Day on Saturday, 24th June from 8 am through to 6 pm. This ten-hour musical spectacular is an attempt to raise the last £300,000 needed to complete the £900,000 Organ Appeal to re-build the world-famous 90-year-old Willis instrument, the largest in these Isles and the much-needed funds for the Cathedral Choir tour to Texas USA later this year.

The Cathedral team of organists will play a selection of organ classics and favourite Hymns, and Cathedral visitors will be treated to a day of music they will never forget as the Grand Organ is put through its paces and all sponsorship money going into the appeal.

There will also be the chance to hear the Cathedral Choir singing Choral Evensong at 3 pm, accompanied by the Cathedral Organ with an organ demonstration following the service.

The Grand Organ contains 10,268 pipes with the largest measuring a whopping 32ft in length and has five keyboards, a pedal board and 200 stops.  It has been in constant use for the past 90 years and is now in need of loving care and attention.  All 10,268 pipes need cleaning and all the internal mechanisms – worn out with more than 90 years of playing – need renewing and refurbishing.

“You can sponsor us by donating at our Just Giving page: or download our sponsorship form Organathon Sponsorship Form.pdf. You can find more information about the organ along with details of the Grand Organ Appeal on our webpages. All gifts, no matter how small, will enable us to return one of the greatest instruments in the world to pristine condition for future generations to continue to marvel at."

Please note there will be restricted access to visitors during the Patrons Evensong from 3 pm until 4:45 pm.

About the Grand Organ of Liverpool Cathedral

The Grand Organ of Liverpool Cathedral is internationally renowned as one of the greatest church organs in the world. Built as the largest musical instrument ever conceived, it is still the largest organ in the UK today.

Completed in 1926, it is one of the supreme examples of the craftsmanship of Henry Willis & Sons, with eight manual divisions and pedals, 200 drawstops, playable from two consoles, and comprising the staggering total of 10,268 pipes.

It has been in continuous service for 90 years, contributing to the dignity and ceremonial of the great occasions in our magnificent cathedral; however, after some 500,000 and innumerable concerts and recitals and literally millions of religious services, it is showing its age, and is badly in need of major restoration work requiring its disassembly, renovation and reassembly of its millions of moving parts, costing in the region of £900,000. The sum of £600,000 has already been raised and two-thirds of the work accomplished, but we now need to find the last third and complete the works.
Anyone can help by making a donation in the organ pipe, and if that donation is placed in one of the envelopes provided, The Lord Chancellor will increase your generosity by 25%.