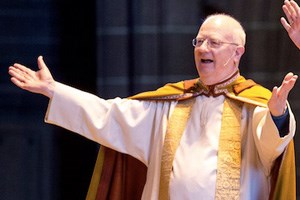 On 31 January 2021, we bid a fond farewell to Canon Myles Davies as he retires. As Vice Dean and Canon Precentor, Canon Myles has been responsible for the music and liturgy in the Cathedral for several years. Although he’s retiring, he will still be associated with the Cathedral and will become Cathedral Chaplain.

“While I’m looking forward having the time to hopefully spend more time with friends, pandemic permitting, as Cathedral Chaplain I’m not leaving the cathedral community completely. Once you’re a priest, you’re always a priest.  I felt God’s calling from a very young age.”

Myles has spent most of his life in the Liverpool area. Growing up in Litherland, he had been a parish priest in the Diocese of Liverpool before becoming the Cathedral Canon Residentiary in 2006.

Ordained for 46 years, he started as a curate in 1974 at St Mary’s, West Derby. After spending three years at St Thomas in Seaforth in 1984, Myles became vicar of St Anne’s, Old Swan, where he served for 26 years.

During that time, he was involved with those seeking their vocational path to ordained ministry as Diocesan Director of Ordinands (DDO), from 1994 to 2005. He also became Priest in charge of St Paul Stoneycroft, then Vicar of United Benefice of St Anne and St Paul in 2007.

Myles remained based in the parishes until 2011 when he became Vice Dean.

He said, “I’ve been Canon Precentor since October 2008 and one of the things I’ll miss most is choosing the hymns. Some of my highlights include the installation of two Deans and part of a cathedral which is a warm, welcoming place to encounter a God who knows and loves you.”

“I’d like to thank Myles for his commitment, deep faith, wise counsel, friendship and liturgical skill and for being the Myles we know and love.”

Succeeding Canon Myles as Precentor at Liverpool is Rev Canon, Dr Philip Anderson. Philip will take up this role in February.